The other day, as I loaded groceries in my SUV, I noticed a stopped vehicle in the aisle.  Assuming the driver wanted my space, I finished up and crossed in front of him to return the cart.  On my way back, his car started slowly rolling toward me.  Turning, I saw him still looking down at his phone while headed straight at me!

He drove on completely oblivious, and clearly distracted.  In that moment, I heard the question, “How much do people miss, looking down?”

The unnamed woman in Luke 13 knew all about that, stuck bent over for 18 years.  Completely earthbound, all she saw were the circumstances down around her.  How. Depressing.  She could never look up and have another perspective.  I know she had a physical condition that kept her bent over, but Scripture identifies it as a spirit of infirmity.

That same spirit keeps many looking down today, simply exchanging staring at hopeless circumstances for looking down at a device.  I understand the draw of distraction.  These are difficult times and while we wonder how much more we can take, diving into a sea of apps hasn’t solved anything for me.  There’s got to be a better way…

And behold, there was a woman who had a spirit of infirmity eighteen years, and was bent over and could in no way raise herself up. But when Jesus saw her, He called her to Him and said to her, “Woman, you are loosed from your infirmity.”  And He laid His hands on her, and immediately she was made straight, and glorified God.  Luke 13:11-13

How do we look up in hope when we’ve been bent over so long, dirt-focused and discouraged?  The answer is in how the unnamed woman straightened up.
*Jesus called her to Him.
*He declared her free.
*He filled her void.
When we bring our disappointments and problems to Jesus, He encourages us in the freedom and victory we have in Him.

We’ll dive into the last one another time, but know this, Jesus doesn’t want you distraught or distracted.  He wants to deliver you from your burdens and pour out His grace. 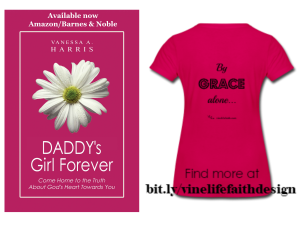 One thought on “There’s Got to Be a Better Way”

Ladies, the Vine Life is living by faith in a healthy community. Healthy is the tricky part because what you believe either breaks or builds you and your relationships.  Connect with us for resources that move you from bitter to better.